The Killing of Al-Baghdadi

Watching President Trump’s announcement of the killing of Al-Baghdadi – and the capture of a huge cache of intelligence – it seemed to me that his words were precisely what was needed at a time like this.  And watching the Twitterverse and talking heads pontificate about his language and wording, I am even more convinced that his blunt, derisive tone, is not only what those who voted for him expect, but eighteen years into the global war on terror, that that blunt, derisive tone is what the world needed to hear.

You could almost hear a collective boasting of pride by Americans that we’re still able to hunt down and kill those murdering, raping, torturing terrorists, even if it takes years to do so.

But that collective pride was pushed back by the talking heads who to this day continue to argue that killing terrorists only serves to “galvanize” ISIS and other terror organizations in their will to destroy the United States.

Despite the comments from Michael Morrell and any number of so-called smart people on television, I have never seen (even during my tenure as the Under Secretary of Homeland Security, when I received regular CIA briefings) proof that our war on terror or the killing of Osama bin Laden or Al-Baghdadi, has resulted in any less anti-American activity by American-hating Islamic terrorists.

President Trump’s insistence on colorful language to depict Al-Baghdadi as a coward cowering in a dead-end tunnel, dying a horrible death (and killing children as he detonated his own suicide vest) is language chosen by his National Security advisors for a very specific reason.  His language rejects the false and failed diplomacy of appeasement.  It also reminds Americans who may be considering joining ISIS or other terrorist organizations that doing so is not a brave move, but one which very well might result in them dying a horrific, cowardly death at the hands of the United States military.

POTUS’ language tells those wannabe terrorists that you’re signing up to die horribly in a dark tunnel.

But back to the appeasers, especially former Director of National Intelligence James Clapper.  In a media appearance this week he said the killing of Al-Baghdadi would only serve to “galvanize” ISIS members.  Let’s think about that logic.

Is James Clapper saying that in order to defeat ISIS we must first capitulate to ISIS?  Is James Clapper saying that in World War II the storming of the beaches at Normandy only served to galvanize Hitler’s army?  Is James Clapper claiming that President Nixon’s decision to bomb Hanoi, only served to galvanize the Viet Cong and North Vietnamese army?  If I recall correctly Normandy was the beginning of the end of World War II on the Western Front.  The bombing of Hanoi brought the North Vietnamese to the table in the Paris Peace Talks.

Enemies respond to strength and resolve, not olive branches and weakness.

President Trump rejected the diplomacy of appeasement, opting instead for the blunt, direct language that represents the strength and determination of a first world superpower that will not be pushed around.

Michael Brown served as the Under Secretary of Homeland Security and Director of the Federal Emergency Management Agency under President George W. Bush.  You can follow him on Twitter @michaelbrownusa.

Posted by Todd Manns, Owner, The Blue Cell, LLC at 3:40 PM No comments:

It began as a simple enough notion. To take a massive archive of previously constructed exercises and electronic files numbering in the thousands and pages numbering in the millions and turn it into something that could be shared, adapted, easily understood and put to good use. The oldest of these files dates back to the early 1990’s. Before there were MEP’s, a Department of Homeland Security, before 911, before WACO and before the Oklahoma City bombing…. True and pure, old school exercise design, and most importantly great data.
Fast forward to the end product today.


TTX Vault is a first of its kind location to purchase both individual and packaged exercises. With our single exercises you receive a plausible and field tested base scenario, in a format that allows you to make it fit your location.
And of course, today there is a litany of Homeland Security Exercise and Evaluation Program (HSEEP) suggested paperwork. It varies from one exercise type to the next. If it is recommended, it is included in the scenario folder.

Posted by Todd Manns, Owner, The Blue Cell, LLC at 5:03 PM No comments:


The All-Hazard Incident Complexity Analysis Tool created by The Blue Cell, LLC is the culmination and collaboration of a number of doctrines to include, but are not limited to, wildland fire complexity, the concepts of managing and prioritizing objectives (life safety, incident stabilization and property conservation) and the advanced concepts found in both Department of Homeland Security (DHS) course of MGT-315, Threat and Risk Assessment for Local Jurisdiction and the Department of Defense (DOD) doctrine of criticality, accessibility, recuperability, vulnerability, effect, and recognizability, otherwise known as C.A.R.V.E.R. This acronym is used throughout the targeting and mission planning cycle to assess mission validity and requirements. 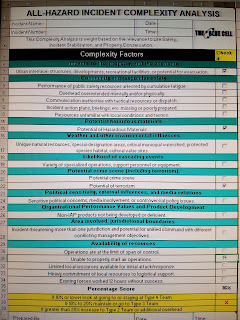 The primary factors on this tool are ones found in the current Incident Command System training 300 level, expanding incidents, national curriculum. In unit four, nine factors that contribute to an incident becoming more complex are identified. Additional sub factors were added under the primaries. Items frequent on many types of incidents. Several sub factors for aviation resource usage, non ICS form product development and terrorism were also added.

With that said, the use of the Complexity Analysis Tool is still more art than science. The tool is influenced by individual input. The matrix weights life safety factors, heavier than incident stabilization, which in turn are weighted heavier than property conservation. The formulas are then designed to offer a suggestion or a possible solution. The red X , which moves based on percentage, moves from one category to another at the bottom of the tool and indicates the increasing and decreasing in complexity.


These are suggestions and does not necessarily mean you need to order an entire team. This is where the analysis comes into play, leading to a conclusion and a decision.

The tool encourages the current incident managers to more thoroughly examine specific deficiencies and determine whether position specific orders of a higher qualification are needed based on the line item in the matrix. In the event the form is being completed manually, five or more boxes checked would indicate the complexity increasing from the  perceived current level. The weights for each factor were intentional hidden so as to support and reinforce objectivity for the user of the tool.

Created in 2010, this tool has been used unchanged and has been run on over 100 incidents in real time and, in some cases, after the fact. It has also been used in simulations and distributed on thousands of classroom disks by The Blue Cell, LLC and The Blue Cell Companies. The tool has been custom branded for multiple agencies at the State and Local levels and is under consideration for inclusion in the current re-write of the FEMA L-962, Planning Section Chief position specific course.

Here is a link to the tool on The Blue Cell website where it is branded under our new F.A.S.T. product line. It is free to download.

LINK TO OUR COMPLEXITY ANALYSIS VIDEO
Posted by Todd Manns, Owner, The Blue Cell, LLC at 7:00 AM No comments:

https://www.facebook.com/InMemoryOfPrescottFirefightersLost6302013
Posted by Todd Manns, Owner, The Blue Cell, LLC at 10:59 AM No comments:


The concepts of ordering, validating, accounting for and tracking resources is a challenge nationwide. Several initiatives are now underway Nationally to address this in the incident and emergency response community. The Blue Cell internally has four projects in development to meet the needs of its customers and is collaborating with one of the leading firms in the field, Salamander Technologies.

Here is an article for HS Today Magazine on changes coming in the HSPD 12 conversation.